Warning: The following work contains descriptive material and scenes of explicit sexual encounters between male and female adults. While not erotica per se, it is intended for adult readers only.
Queen of the Stars | Preview | Reviews 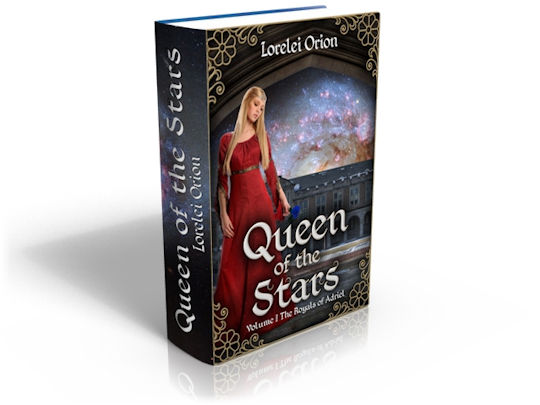 When the Revolutionary Commander abducts Princess Sarra to destroy the sovereignty, he can't foresee that he will become her captive...

The first in The Royals of Adriel saga...

It all begins within the colonized Cassiopeian Sector, within the marvels of the 23rd century, where planet Adriel's savage revolutionists abduct beautiful Princess Royal Sarra Shantay, the heiress apparent of King Ellis II. Sarra, innocent yet highly spirited, is the rebellious captive of alias Raine Nicks, the handsome yet vengeful rebel leader who ultimately aims to end the Shantay worldly rule ... but his plot to ransom her for illicit weapons goes awry by dissidence within his own clan, sweeping her off with him in a breathtaking adventure between Kan and Myrrh, two of the Urania Star System's exotic planets.

Now allies, joining his cause to free Adriel's oppressed, she also becomes caught in the perilous rebellion, for only his mysterious identity can uncover the sinister corruption deep within the sovereignty. The revolution erupts, sending her on the path of her destiny—the wondrous and tragic Throne.

Queen of the Stars Reviews

--a good read for all the futuristic book lovers and I really look forward to reading the next book in this saga."

Loved it!! by Aries Diana
(Amazon.com)

I loved this book!! It falls under the science fiction genre, but it has all the elements in a romance novel that I love. The author made the characters, as well as their worlds and galaxies, come alive in incredible descriptive detail. I am looking forward to the sequel!

LOVED IT!!!! by DianaSakioti
(Amazon.com)

I loved it!!!!!!! Lorelei Orion, with her amazing talent, has managed to create an incredible world of adventure and romance that will have you on edge until the end. The main characters, Raine and Sarra,with their amazing wits,courage, and incredibly sexy passion are irresistible. They had me pinning for their survival and romance from start till finish. While reading the book my emotions became one with Sarra's; I was overjoyed when she was happy, and ready to cry along with her when she was devastated. Raine of course I adored from the moment he was mentioned in the book, you just can't help but love the guy even when he unintentionally hurts Sarra. As I said before I loved it.. and loved it... and loved it.. as will anyone that starts reading the book. I recommend this everyone and will be waiting for more books from the author. There are very few fiction books that influence people and provide so strong emotions after you read them, and Lorelei Orion has created one of them!!!

The story line was one that kept me intersted in seeing what happened next. The descriptions were very well written and vivid. The story line was consistant. It was fast paced and kept me hanging on for more. I love the way the author took the reader from one location to the next with such colorful and beautiful descriptions. I also like to have a bit of romance incorporated into the storyline. All in all, a very good read.

I picked Queen of the Stars up not sure what to expect, but liking the glimpse I got. QotS follows Princess Sarra, the heir to the throne of Adriel. The book opens with wedding preparations, but our heroine isn't happy; the man she's been promised to is...well, he's kind of a jerk, and everyone but her father can see it - the trouble is, no one else but her cares. Despite that, she's willing to do her duty by the state - until she's kidnapped by the mysterious rebels, who are smarter - and angrier - than they look. Though at first terrifying, her ordeal will change the way she views her world - and the rebels will change the way they view her.

Though I was a little leery of a glorified stockholm syndrome sci-fi adventure, I was pleasantly surprised to find Sarra to be a strong yet vulnerable while still appealing heroine. Raine is a moody hero torn between his sense of right and his heart - and the chemistry between the two is pretty fantastic.

Overall, the plot and the romance - along with the sex - proceed at an appealing pace that leaves you wanting to turn each page; the novel is well written and does a great job drawing the reader in. If the chemistry between the leads had been slightly more realistic - I'm always a little wary of those who go straight from fighting to sex - this would have been a solid 5 star.

I really loved this book. It's full of action, romance and space travel. It was very easy to read, and the characters were very like able. I can't wait to read the next book!

This was a fantastic story. I loved the main characters. Unlike many stories, the love between the characters builds instead of the rushed, can’t resist, relationship. There are lots of ups and downs and suspense to keep you reading WAY past bedtime.

I know you are not suppose to judge a book by its cover, but I do. When I picked this one to read, I found the cover uninspiring. I had assumed it would be a quick, easy, nothing special, sci-fi romance. I got more; great story line, heart felt love scenes and a connection to the characters.

So, if you are like me and look at the cover to judge whether or not it looks exciting enough to read, pick this one up. I think you will find a great book behind the simple cover.

--The pinnacle of romantic sci-fi by Tracey Madeley
(Amazon.uk.com)

The story concerns Sarra Anna Shantray who is kidnapped and ransomed by Raine Nicks. I was immediately irritated by the description of these characters, the page 3 Barbie and muscle bound Ken, due to the obvious cliché. However, they were both strong characters, stubborn, courageous, ingenious, vulnerable with inner conflict and struggles, making up for the initial annoyance. Again a captive falling for her jailer is a little predictable, but I think it works because the writer allows us to see their inner conflict and how their feelings progress.

I sound like a broken record when I say new authors should not write sex scenes as they are generally boring for the reader - not in this book! They engage and draw the reader in, making them feel the characters are genuine in their emotions. Their feelings have developed in the story before anything physical takes place and we feel the emotional connection. Perhaps this is what makes the author's work stand out for me. She has invested in the characters, their highs and lows, and so does the reader.

There are not many beings from other worlds in this book. The Kalcoons are the most prominent and the scene in the bar in the latter part of the novel is really disturbing. The combat scene at the end of the novel concentrates on strategy and motive, although there is some description of the battle, it is secondary. For me this worked better and allowed me to visualise and participate in what was going on.

If I was to sum this book up in one sentence I would say - everything you want in a novel, well structured, well written and engaging.